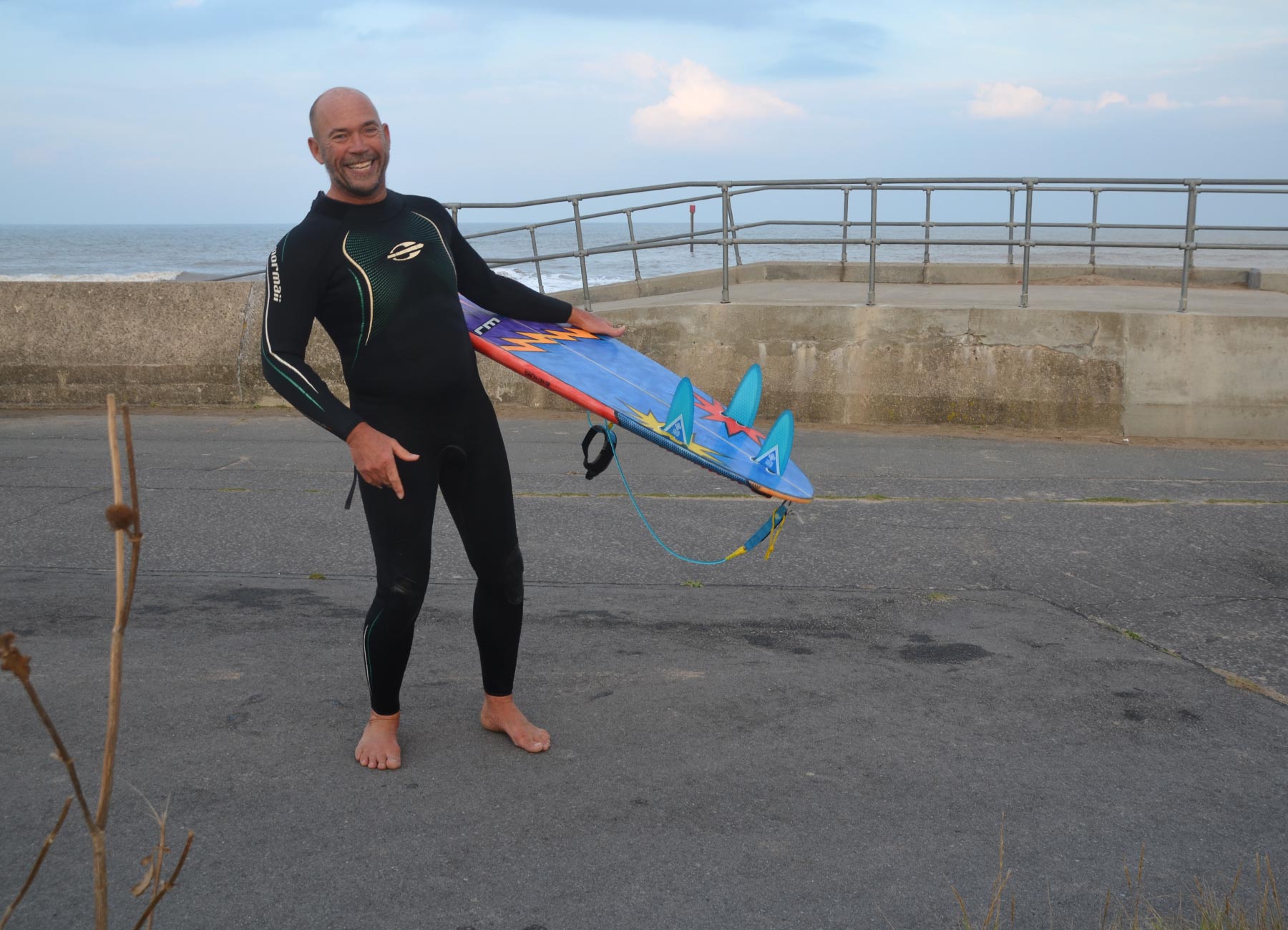 Mr Neil Bryan is a unique character and a mainstay of the Lincolnshire surfing community.

Neil has continually ridden waves along the Lincolnshire coast ever since his Dad took him out surfing at Mablethorpe  back in the early 70’s . Over that time he has seen many surfers come and go but even to this day when conditions are right he’s still keen as mustard!

Not one for getting caught up in ‘the right thing to do’ or bow to the expected social norms Neil has instead paved his individual path to happiness.  Working the summers as a lifeguard and then disappearing to warmer climates for the winter Neil has travelled to places and surfed waves that most of us could only dream about. Literally pick a spot anywhere in the world and chances are he has been there and surfed it! He’s not ready to stop yet either, as in his own words ‘There are still so many places to go’.

What got you into surfing?
My father got me into surfing after he discovered it whilst having family holidays in Cornwall in the late 60’s.

What’s your earliest memory of surfing the Mablethorpe/Sutton on Sea area?
My Dad taking me to Golden Sands in Mablethorpe (directly out in front of where the Seal Sanctuary is today) and there would be a full on sandbank out the back at mid tide.  It was almost like a little island that you had to paddle out to and that’s where I learnt to stand up and surf.

Tell us about some of the boards that you used back in those early days.
When I was 4 my Dad made me a tiny foam body board which he had covered in multi coloured electrical tape. A year later he got me a Paipo wooden board and a year on from that I got my first proper fiberglass surfboard a 4’ orange single fin round tail ‘Keo’ surfboard which was shaped in Newquay. It was my pride and joy !!

I’ve had a lot of memorable boards since that first fibreglass one. A ‘Rollo’ 5’8” rounded pin single fin (which years later my dad transformed into a windsurf board fitted with a hookipa storm sail – scary speed!), a ‘Greg Webber’ very wide square tail 5’8” twin fin, a ‘Crab Island’ 5’6” quad channel bottomed swallow tail and a ‘Phil Byrne’ rounded pin 6’ thruster with faint channels (purchased during my first trip to Australia in 1987). Since 1994 I have got all my boards from Ricardo Martins a legendary shaper and friend from Brazil who has worked with some of the worlds best surfers including Victor Ribas, Jadson Andre and Raoni Monteiro.

Back then were there any others surfers in the water and if so what the names of the ones you remember ?
It wasn’t until the mid 70’s that through my dad I got to know the name of the blokes who were surfing. Prior to that I was too young and shy to talk to anyone! I remember Mike Davis (also a keen windsurfer) who was a policeman and later became my sisters swim coach. Then there were the two Brians, Jarret and Stevenson, Alan Pratt  (a local long boarder that would be out wearing a long john and had what looked like a classic old 10’ bilbo mal), Paul Flint, Graham Roberts along with Pete Holmes who a few years later was accompanied by his brother in law Chris Dunn. There was another guy who I remember seeing regularly and was a decent surfer (but whose name I’ve forgotten) who moved to Wales around the early 80’s.  Another familiar face in the line up back then was Ken Brockelsby from Grimsby who was the man who formed the first Lincs surf club. 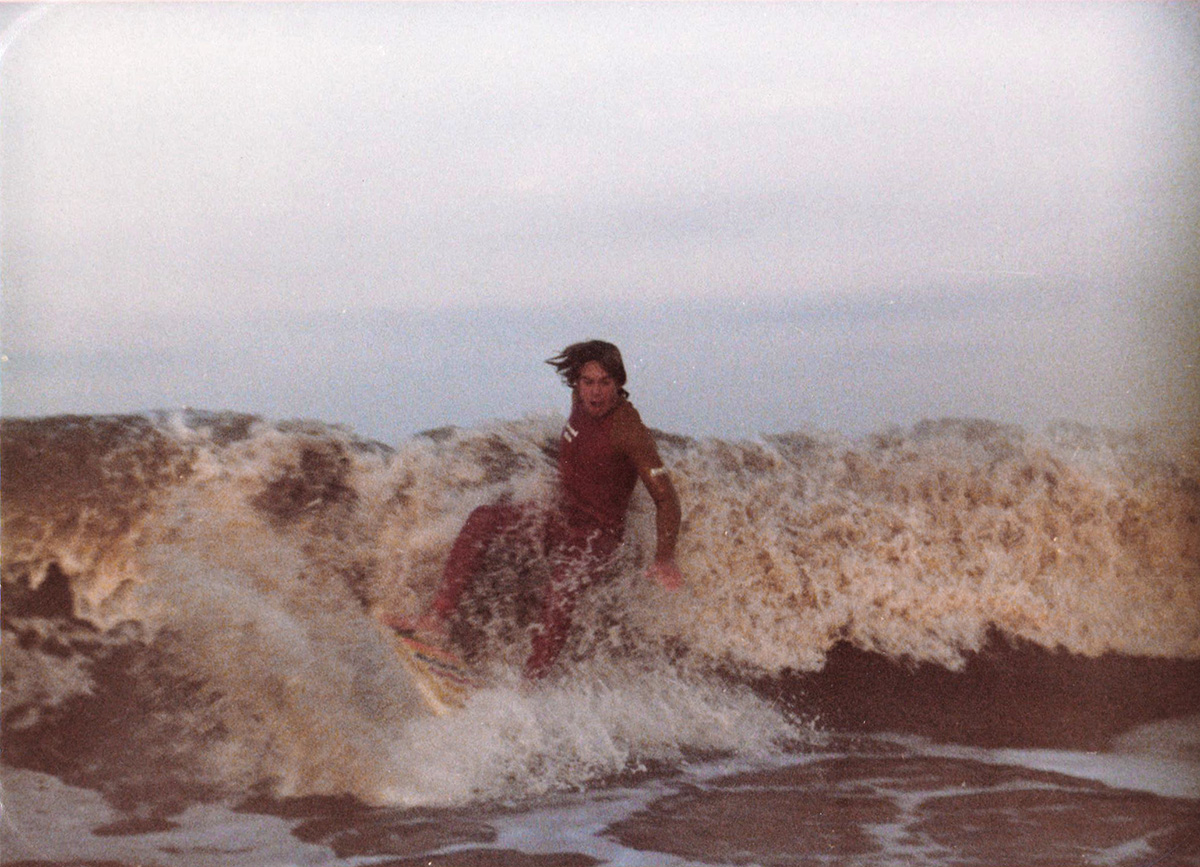 In the 80’s there would be a few of the guys mentioned above still getting in but none during the winter months which were bitter cold and a lot harsher than now. Tony Bridges appeared on the scene and a couple of guys from the Holton le Clay area; Gary Casey and a big bloke with long ginger hair and beard (not sure of his name I just remember him as ‘taffy’). They were pretty keen for surf missions and at the slightest sniff of a swell would pick me up in an old blue bedford camper van to surf at Sutton or Scarborough. It was also during this time that I met a few other surfers like Paul Wheat from Nottingham and Neil Rawlinson from Cleethorpes. He was followed a year later by his kid brother yourself Mr Rawlinson! 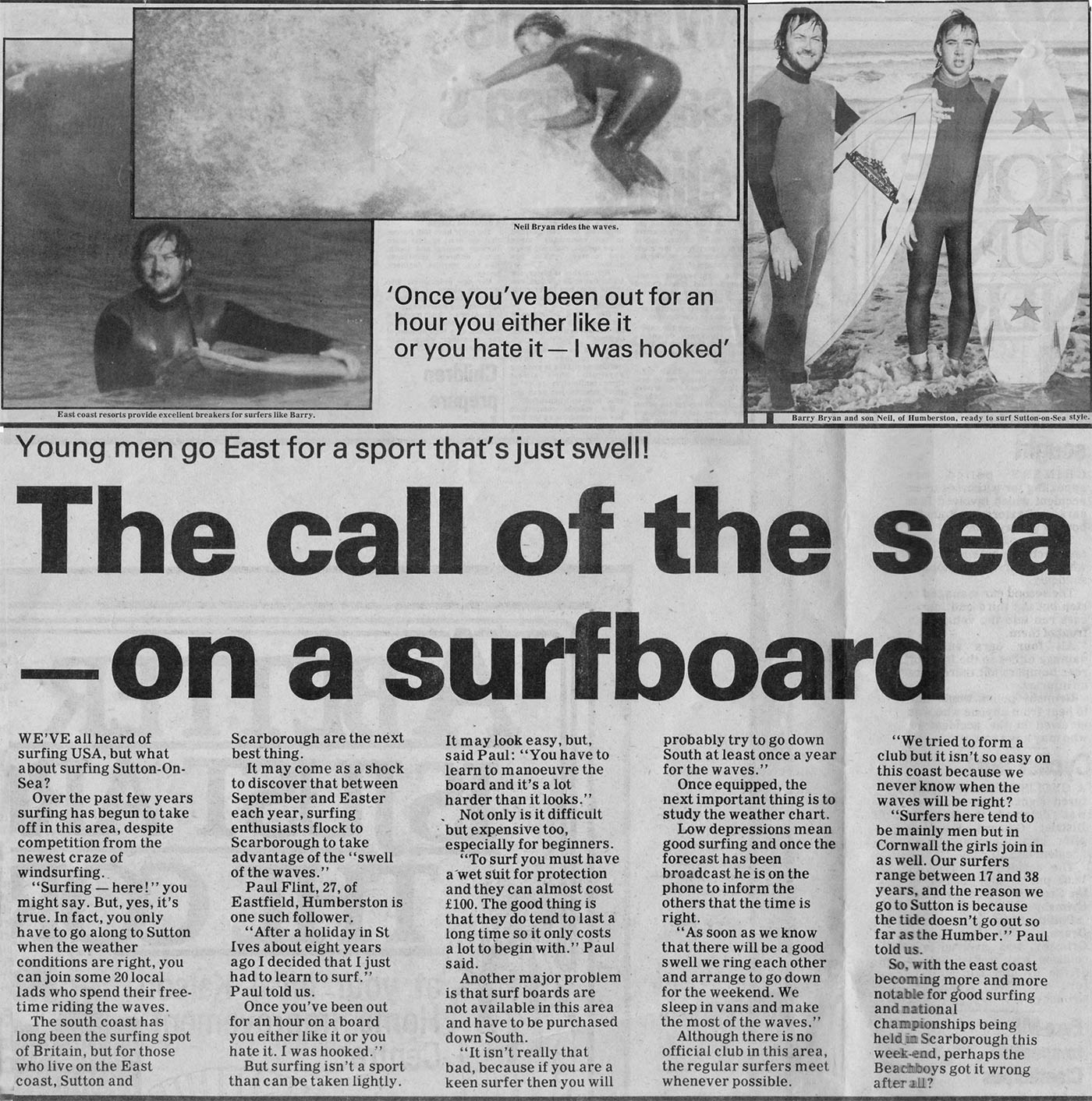 What’s the most memorable session(s) you’ve had from surfing the Lincolnshire Coast?
I distinctly remember a session at Sutton on Sea out infront the beach hotel when I was about 10 years old.  The water and weather was super warm and the waves were a perfect 3-4ft and glassy. There were about 10 others in the line up who were all just cruisers. It was at this moment when I realised I did not  want to just take off and stand still like them and so I started learning how to pump my board to go faster! 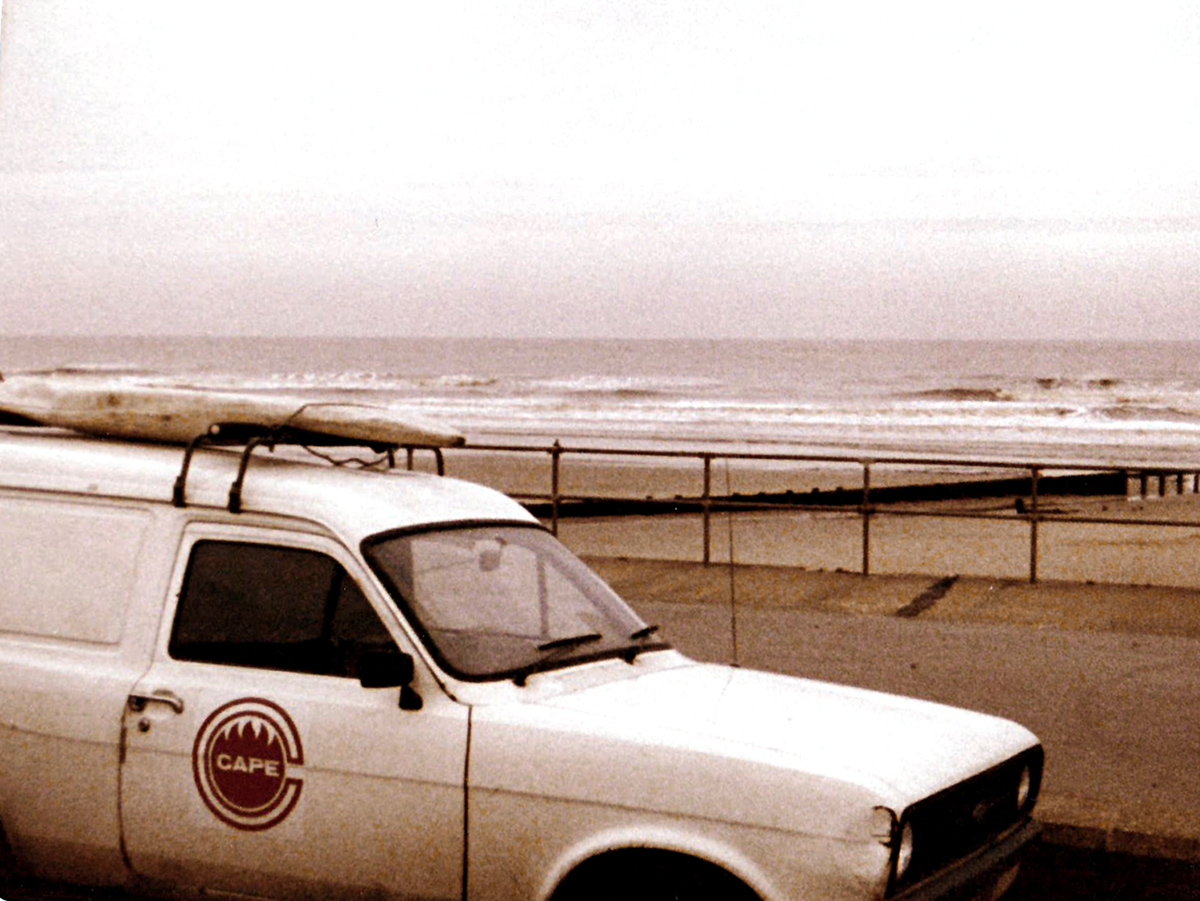 I also remember borrowing my dad’s VW kombi van not long after passing my driving test and heading to to Sutton on Sea for a surf with Tony Bridges.  It was a beautiful winters day but on the backroads from Theddlethorpe to Trusthorpe I hit black ice and landed the kombi upside down in a ditch! Luckily a local farmer pulled us out with his tractor and although the front end was all mashed up the van was still operational so we decided to plough on. Eventually we pulled up on the beach hotel prom where we were greeted to the sight of 3-4ft perfection. 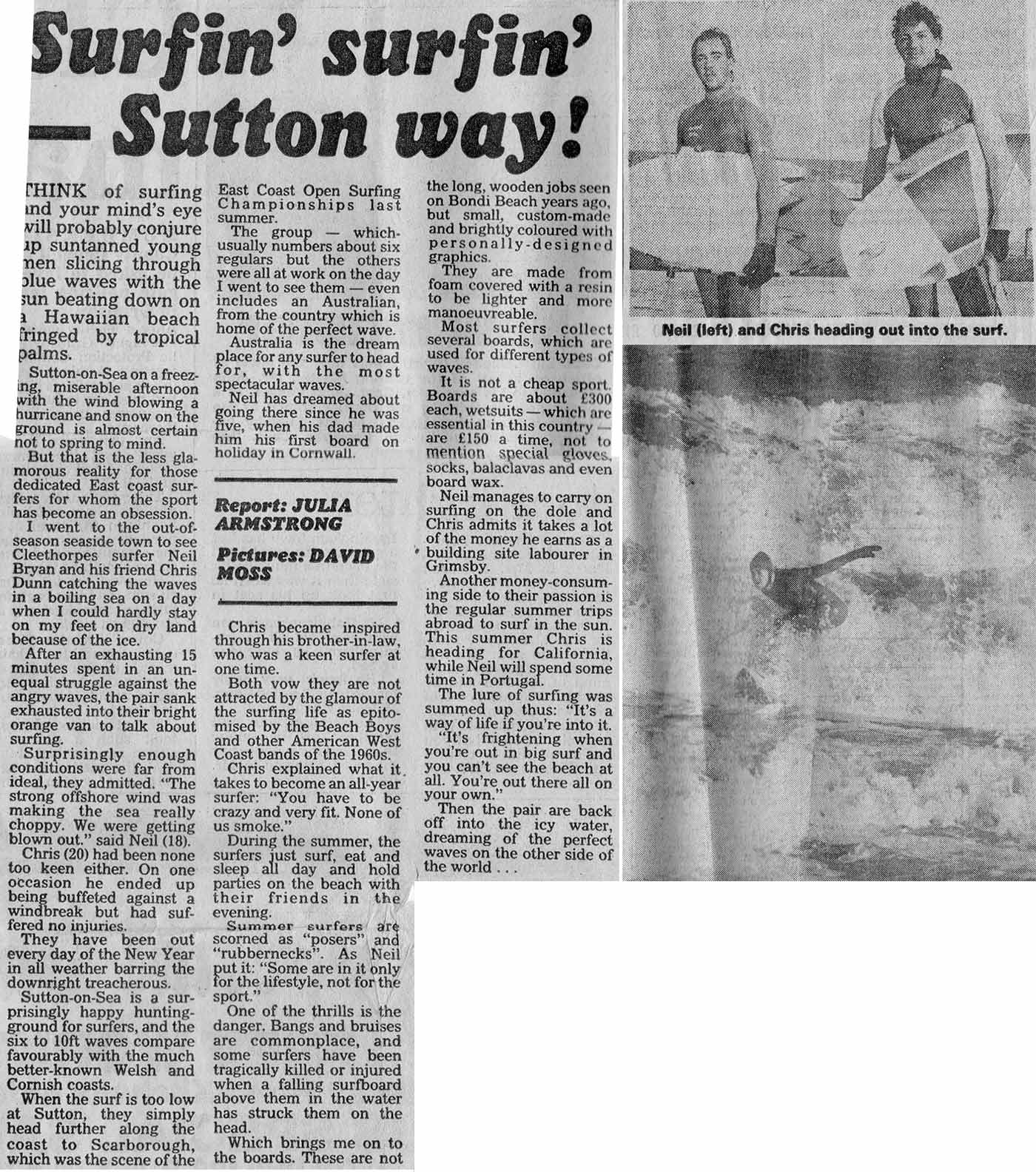 Why do you think a proper community of surfers have never really materialised along the Lincolnshire coast compared to the rest of the UK?
I would say firstly it’s due to the inconsistency of the waves and secondly the cold climate. Surfing this coast can be very frustrating!

There can’t be many surfers who have travelled as extensively as you. From your travels pick out 3 of your favourites destinations and briefly describe why.

To pick 3 favourites is very hard but here we go..

The mid to late 80’s in Indonesia will always be special. I was fortunate to surf all those famous breaks either alone or with a couple of friends . Nias back in 1986 was the most incredible and mystical place . Still very tribal, with no electric or real roads and just a handful of Aussie surfers. Also Lombok was still unheard of with regards surf. I was lucky to be among the first crew of surfers to explore that southern part of the island. At that time the locals were not accustomed seeing foreigners and all the villagers would turn up and follow me down to the break. Basically all those places that are well and truly on the Indo surfing map nowadays were still as perfect back then but with only 2-3 mates out. That’s all but a dream these days.

In the early 90’s I travelled overland through Venezuela/Colombia/Ecuador and down into Peru where I scored waves everywhere I looked. Mancora a dusty roadside village with a real fun left hand reef point (and second only to Grimsby to having the best fish n chips in the world!!). Chicama which has one of the longest lefts in the world and gives rides that make your legs turn to jelly. Punta Rocas, La Isla , Kon Tiki and a whole host of other quality breaks, Peru is littered with waves.

The final place I don’t really want to disclose as I want to keep it off the radar for as long as possible. I visited these incredibly wild islands for the first time back in 2005 with a kiwi friend. It was a crazy  adventure with no real roads, crocodiles, sharks yet unbelievable beauty and perfect empty waves. I’ve been returning to these islands every year for its short ‘on’ season ever since and amazingly it has still managed to remain pretty much off the radar. I’m hoping that as it is a REAL  mission to get to the exploiters will never come and turn it into what Bali has now become.

Due to the risk of flooding the Lincolnshire coast

Gotta love a sneaky inside double up. Winter dream

A lessor spotted Lincolnshire right. With a majo

New blog post just gone live on site!!! Not to b